6+1 Best Shakshuka in Tel Aviv, Including My Very own Recipe

Shakshuka in Tel Aviv is like pasta in Rome, or bagel in New York – with my help now you can find the best one in town, and even cook your own version. A foodie-post, originally written for Unlock Tel Aviv magazine.

Some call it the Middle-Eastern ratatouille, others think it’s a relative of the Balkan’s famous “lecho”, but as for me, I look at it as a unique perfection of its own, one of the must-try dishes when in Tel Aviv. Shakshouka is a dish composed of spiced-up tomatoes and peppers, topped with a sunny-side-up egg. Fried and cooked in a pan, often pimped out with grilled onions and eggplant, some even dare to experiment with zucchini, spinach and tofu. With our help now you can find your path in the street food labyrinth and get the best shakshouka in Tel Aviv. 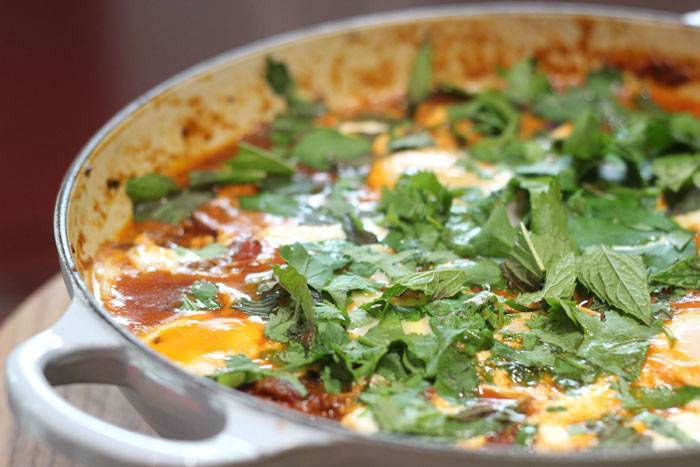 Living (and eating) in Israel, debating the origins of the shakshouka often creates waves – some claim it’s a classic Jewish recipe from Tunis, others are convinced it’s a basic Palestinian dish, and there are some who say it comes all the way from Morocco, and it’s a relative of their legendary tagine dish. But whatever the truth is, many different cultures sharing a favourite dish only brings people closer together – it doesn’t matter who invented it. What’s important is to share recipes and happy moments around the table, getting closer to each other through culinary experiences. 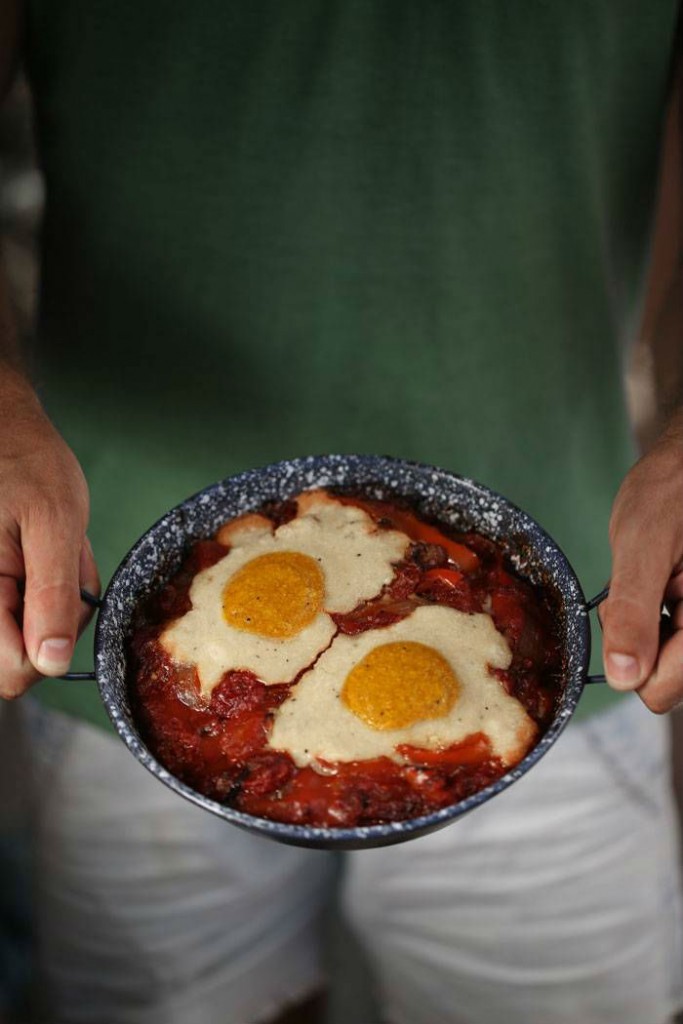 Shakshuka in Tel Aviv is going through a renaissance these days: about a decade ago, it was considered to be a dish that only grandmothers and Middle Eastern eateries make, yet now it’s set on the menu of every single café. Many street-food stands experiment with new versions – filled into pita bread, or stuffed in bourekas, a local savory pastry you’ll get addicted to the moment you land in Israel. And as the White City is high on the list of the most vegan-friendly holiday destinations of the world, the eggs are often switched to omelets made of chickpea flour, or tofu marinated in black Himalayan salt – a secret vegan favourite for mimicking the taste of eggs. 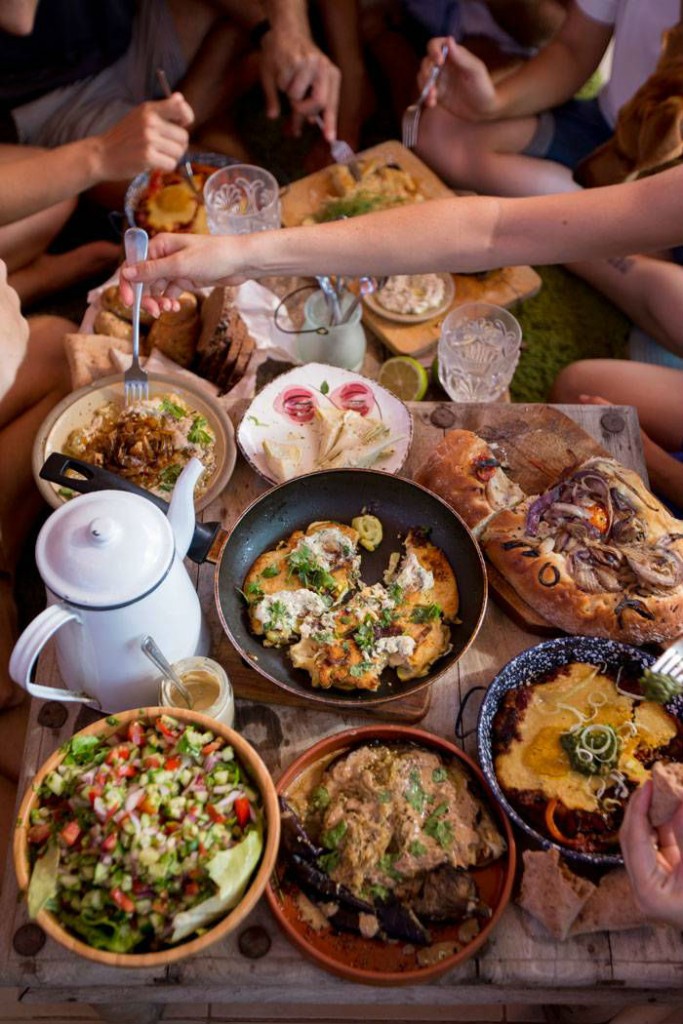 This hipster-favourite ruin bar in Jaffa’s flea market is the ultimate place to start your day before a shopping spree around the neighbourhood. 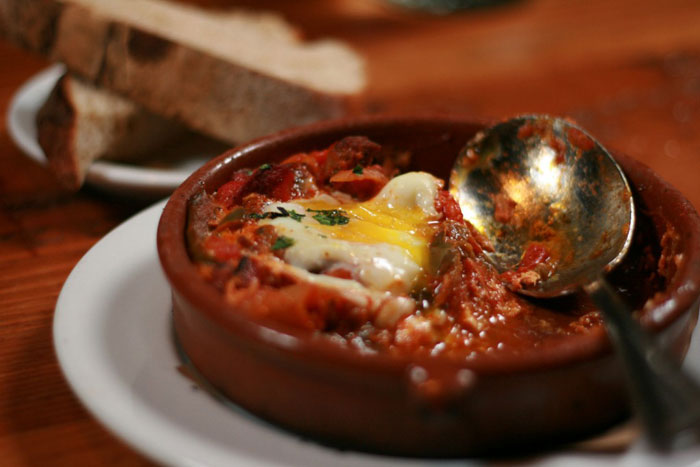 Available in a vegan version, this shakshouka is mostly composed of the sweet tomato sauce, and it easily beats the close-by tourist favourite, Dr. Shakshouka’s, signature dish.

Here’s a perfect example of swapping eggs to eggplants – and absolutely no regrets for doing so. 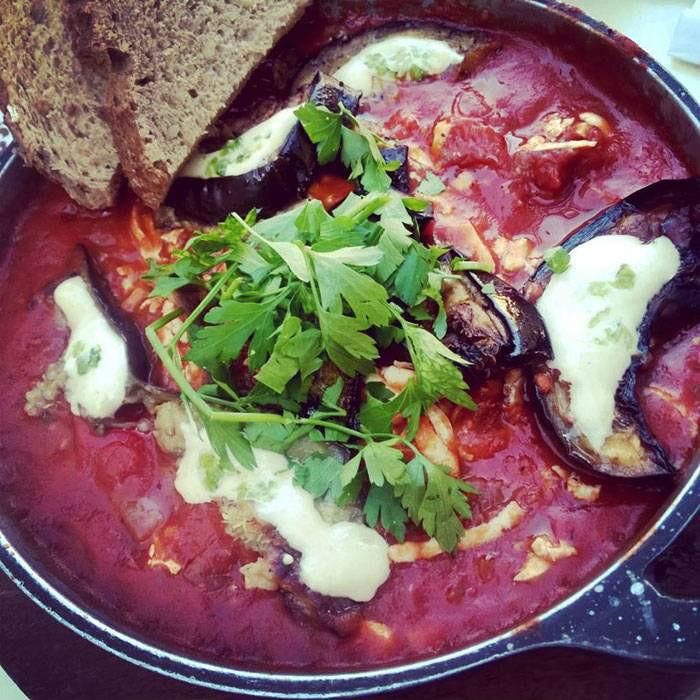 Hidden in a narrow street in Jaffa, this student-favourite local restaurant offers several different shakshoukas, including a mangold and spinach version and a vegan version with sliced aubergines and a handful of boiled chickpeas.

Incredibly tasty, this version has little to do with the original shakshouka, yet it’s better than most authentic versions in town. 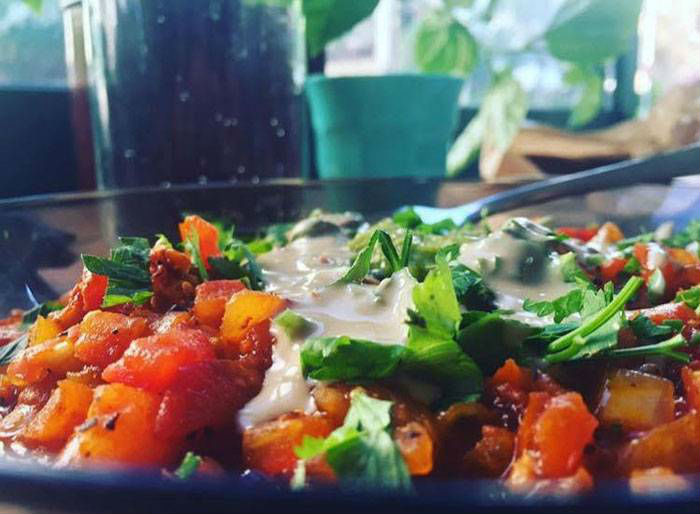 The reason it made it so high on this list is that it’s an inventive and creative reinterpretation, filled with zucchini and lentils, and it glows yellow with golden olive oil and spicy turmeric.

One of Tel Aviv’s most famous vegetarian restaurants offers a satisfying, classic shakshouka with rich, creamy tomato sauce, almost as thick as gravy. 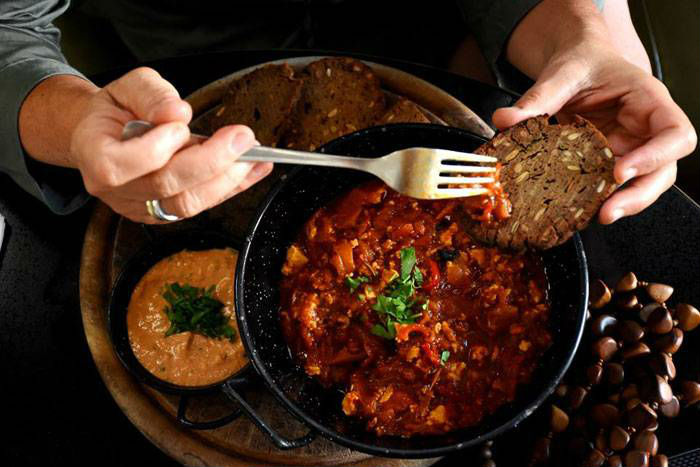 The vegan option comes with tofu, accompanied by a crunchy salad and a refreshing squeezed juice or their fabulous homemade iced tea.

The king of vegan restaurants of Tel Aviv is this family-friendly eatery where the kitchen is right in front of your eyes, and the traditional Persian recipes come alive with a Tel Avivian twist.

Their shakshouka is everything one can dream of – oriental and Mediterranean at the same time, and although its 100% vegan, it truly has a soul of its own.

After the king, we arrive at the queen; Orna and Ella’s tofu shakshouka is so velvety, so pure and perfect, it’s a sin to miss out on it. The owners are a lovely team, managing this sophisticated yet simple restaurant for over one and a half decades. 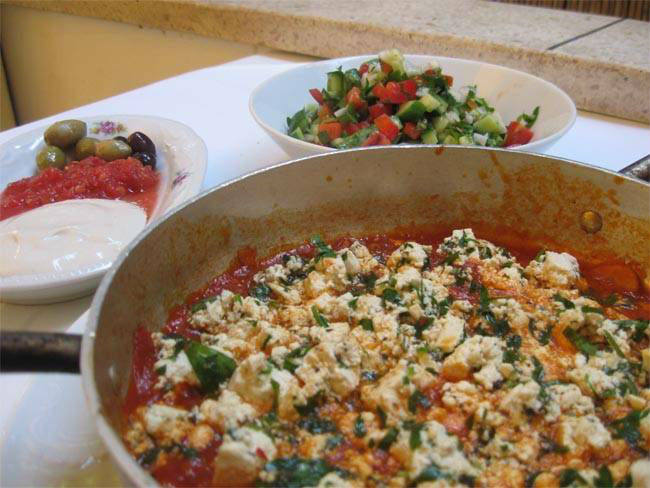 The venue is in the middle of the once hipster-favourite, these days more urban, Shenkin street, and it’s also famous for being an important location of the shooting of the internationally-known Israeli movie, The Bubble.

Many people are afraid the try vegan cheeses, but these days there are an incredible variety in the organic shops, many of them without soy or saturated fats. I can guarantee, a great melting cheese is the best thing that can happen to this classic breakfast dish.

Alternatively, a mix of water, chickpea flour and a pinch of black Himalayan salt, poured over the boiling dish, can create a fancy topping – the “yolks” are none other than a small part of omelet mixture, itself coloured with crushed, smoked paprika and turmeric, mixed with a few drops of orange juice. 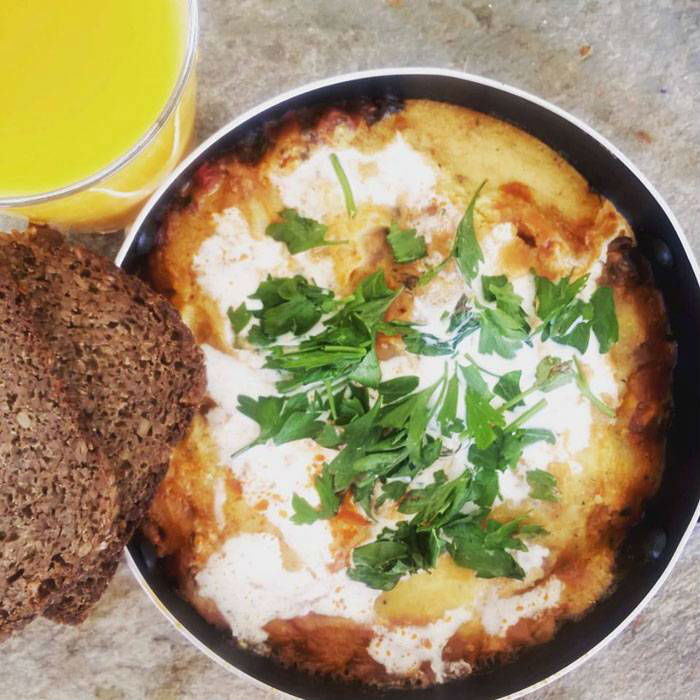 Click here for an updated recipe of mine from my vegan cookbook, Kristóf’s Kitchen, and my blog post for the Israeli food magazine, AlHaSulhan – now you can learn how we make shakshouka in Tel Aviv.

For a vegan brunch Tel Aviv style sign up for a cooking course or a breakfast at steiner.kristof@gmail.com. Now that you’ve found the best shakshouka in Tel Aviv, don’t ever miss a new post on my latest blog platform in collaboration with the Sea N’ Rent Team – join our mailing list for weekly newsletters and special discounts on Tel Aviv accommodations, and  follow my latest project’s Instagram profile @SeaNRent_UnlockTelAviv , and my personal Insta. 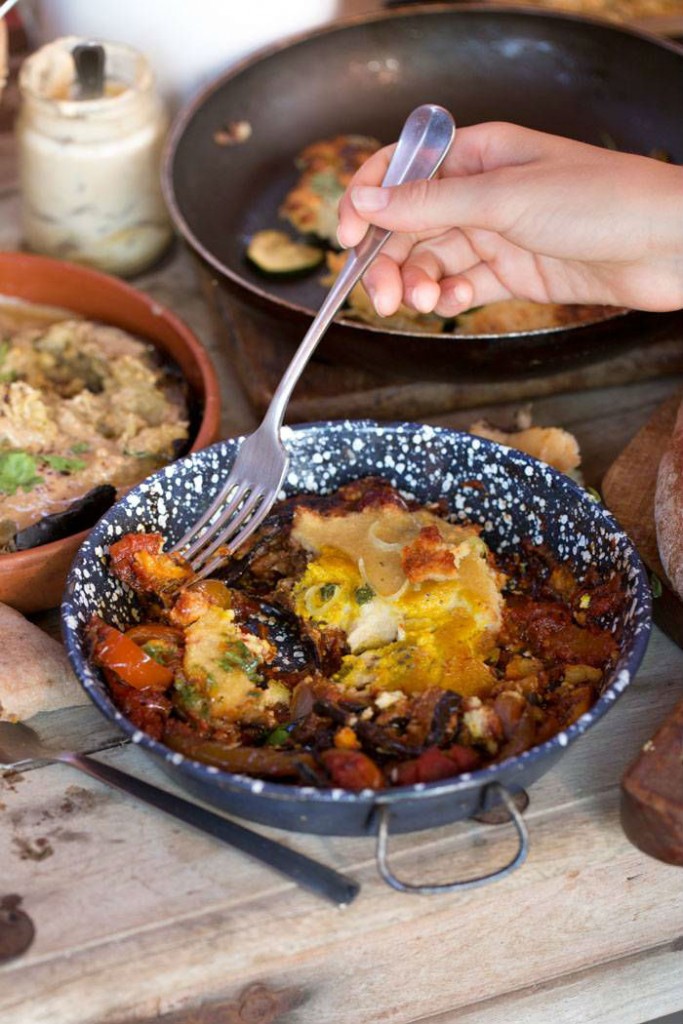 Photo credits: cover image, 2, 3, and last pic by Sara Salamon, Mate Czaban and Ron Itzhaki, the rest are from the official pages of the venues.

Overjoyed to share with all of you guys my lecture on vegan food in hotels...

Amazing Anniversary – It’s been 5 years since I first met Nimi!

The Birthday Chronicles – of a my last year in my thirties

It all started one day before my actual birthday - when Nimi told me not...
About the blog About me Contact me
Tag Cloud
View my earlier posts
x

By continuing to use the site, you agree to the use of cookies. more information